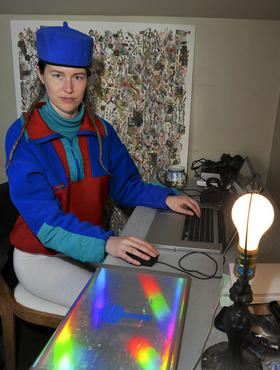 Brenna Murphy has for years explored the mystic aspects of cyberspace through web-based explorations. More recently, Murphy has exported some of the formal aspects of these as images and laser cut acrylic forms. She calls the forms glyphs, and thinks of them as a kind of language, and of their arrangements as labyrinth-like “hyper-dimensional circuit[s].” As she is exploring image and form, arrangement and movement as a meditative tool for herself, she invites the viewer to approach the objects in arrangement in the same manner.

Murphy was a founding member of the installation and performance group Oregon Painting Society. Today, she collaborates with Birch Cooper in MSHR, a performance duo. Touch, light, sensor, synthesizer and sound combine in speculative performances. MSHR say that they make “installations that place the human body into a dynamic relationship with sound and light, generating expanded sensory experiences.” As MSHR, Murphy and Cooper have performed throughout Europe and the United States.

Recent solo exhibitions of Murphy’s work have been presented at American Medium, New York; Yerba Buena Center for the Arts, San Francisco; Kunstverein Düsseldorf, Germany; Gloria Maria Gallery, Milan, Italy; and The Future Gallery, Berlin, Germany. Her work has also exhibited throughout the United States and internationally in Monterrey, Milan, Berlin, London, Paris, Rome, the Netherlands and Sweden. Notable group exhibitions include This is What Sculpture Looks Like at Postmasters and The New Romantics at Eyebeam Art + Technology Center in New York. Her work will be included in Portland2016: A Biennial of Contemporary Art, produced by Disjecta and curated by Michelle Grabner. Murphy has a BFA from Pacific Northwest College of Art. She is represented by Upfor.