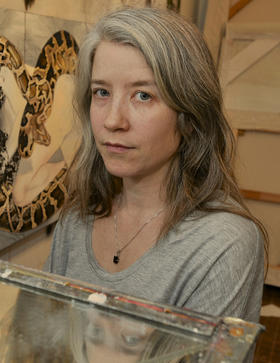 The nude female figure, often in classical pose, recurs in these enigmatic paintings. In a recent exhibition at Nationale, When We Dead Awaken, the object-ness of the female form was foregrounded by its interchangeability, in the body of work, with single ceramic vessels. Two of the women depicted are armed and in domestic settings with wood paneling and crocheted afghans, resulting in moments both mundane and dark.

“Protest is a fundamental reason I paint. Protest against sexism, against the status quo, against what I should be doing,” Malaska says. Malaska began this body of work thinking about art as social protest. She explains, “I think that there is hope for me in the female figures who possess power despite their circumstances; they are not victims and they have control. Maybe not ultimate control, but given the circumstances they possess a powerful degree of control.” She often uses the word “we” in her titles as a way of both expressing solidarity with and implicating the viewer.

Born in Portland, Malaska earned her MFA from Pacific Northwest College of Art. Her work has been shown at Froelick Gallery, Disjecta, Portland Center Stage and San Francisco’s California College of the Arts. She has been a finalist for The Joan Mitchell Foundation MFA Grant and the Fine Arts Work Center fellowship and has received the Barbara Deming Memorial Fund’s Money for Women Grant. Malaska received her BFA from California College of the Arts. Malaska is represented by Nationale.