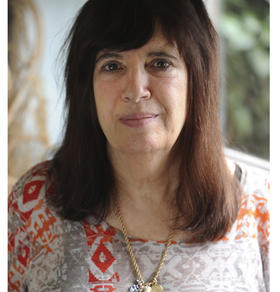 Portland audiences had the chance to see Fernanda D’Agostino’s work in full flower at her 2013 exhibition, The Method of Loci at the Art Gym at Marylhurst University. A retrospective of sorts, the exhibition was constructed as an interactive memory palace (referring to the ancient Greek mnemonic device).

D’Agostino says she had the exhibition in mind since the 80s. Her first exposure to interactive media sparked a desire to make viewers part of her art. In 1986, she had created an interactive soundscape with dozens of small sensors and speakers, controlled by a room full of networked Tandy computers. The project combined field recordings she made in Montana with human voices. Also in the early 80s she gradually taught herself to work with video.

D’Agostino comments, “I am interested in creating places where people can experience themselves differently... We all have inner architecture. I was interested in making a physical analog for that.” Indeed, viewers reported that being in her The Method of Loci was like walking around inside your own head, just as she had been hoping.

D’Agostino credits travel to art and new media festivals with opening opportunities for new conversations, relationships and collaborations. She met her current collaborator, programmer Jim Bell, at a festival in China in 2008.

This year, D’Agostino will create the final installation at Seattle’s venerable Suyama Space. With this piece, she adds to her list of collaborators Montreal performance artist Isabel Choiniere, whom she first met at a festival in Colombia. The work will meld natural sounds and microstructures/patterns with the movements of bodies in an address of global warming.