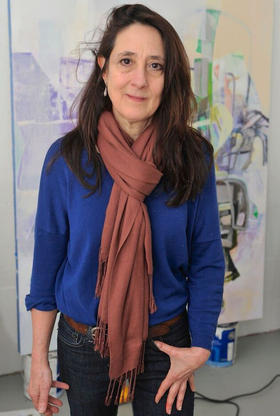 Laurie Danial in front of one of her paintings.

An unshakable commitment to process and instinct is what Laurie Danial will tell you characterizes her practice, which results in prints and paintings featuring complex layerings of organic and architectural forms.

A confident, exploratory stance fuels Danial. She once titled an exhibition at Froelick Gallery Control Release Control, a perfect phrase to describe her time in studio. “After 25 plus years,” Danial says, “I still feel enormously challenged by the process, but also I have learned to embrace the notion that I don’t know how it’s all going to end up. I struggle, and then I eventually figure it out. I’ve learned to trust that.” And the viewer knows it, feeling a sense of freedom and the thrill that an artist’s risk-taking can bring about in the work.

“My connection to our light and landscape looms large. I am also using and referencing imagery that I collect on my iPhone, visual vignettes that only I can see, images that appeal to me,” Danial says. She often works on a painting over a long period of time. She may start with a structure, but intuition takes over.

Danial studied printmaking and painting at Pacific Northwest College of Art, Portland State University and Reed College. Danial was selected for the 1991 Oregon Biennial at the Portland Art Museum. Throughout the 90s, Danial was represented by Quartersaw Gallery. She has been represented for nearly a decade by Froelick Gallery.

"I've been making art all my life," she says. Danial began making art as a young child in part because, she explains, "I wasn't verbal. I found my meaning through image making. And through making, meaning came to me, instead of my work expressing this is what I am or the work is about."

Danial’s exhibition Making Home is on view through May 28, 2016 at Froelick Gallery, in Portland.