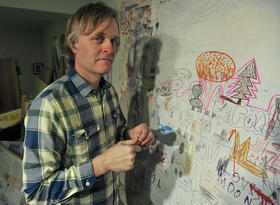 Michael T. Hensley in his studio.

For Michael Hensley’s most recent series of paintings, he threw every available material into the mix, including house paint, spray paint, pencil, collage, crayon, paint pens and even dirt from the garden. He says he “began to paint over older paintings and scraped back into them revealing previous layers, colors and images.” He reports that at the time, after experiencing “a series of tragic personal events, I felt I had nothing to lose,” and at the same time, “felt comfortable with being lost.” Hensley says that through all of it he realized that he wanted an experience of the process of painting that was spontaneous, mysterious, and revealing in the end.

One might imagine that in addition to a full array of media aimed at these works, there is a commensurately broad bank of mark, glyph and image that Hensley draws upon in these densely layered works. Flashes of pop-derived colors and figures accumulate in a maximalist fashion. A review of his 2015 show at Atlanta’s Sandra Marks Gallery notes, “Overlapping marks are built up quite heavily on these panels. Scrawls, drips, inscriptions, brush strokes, smears, and doodles are layered upon each other.” The result, as the writer notes, is somewhere between joyful energy and dystopic, overwhelming confusion.

Hensley has painted a number of highly visible murals and public art works including three murals for Outside/In, designs for Tri-Met bus shelters and a youth mural project along Interstate's light rail line.

His work is held in collections including those of Oregon Health and Science University, City of Portland Portable Works Collection (administered through the Regional Arts & Culture Council), Modera Hotel, Microsoft and Twitter. He has frequently shown at Blackfish Gallery and Mark Woolley Gallery in Portland. Hensley has recently shown with longtime Portland dealer Mark Woolley, and has a planned exhibition with the venerable Linda Hodges Gallery in Seattle in November.