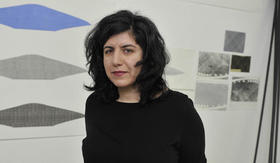 At PICA’s TBA Festival last year, Tannaz Farsi’s work And Others consisted of a large LED display of a short text from Bertolt Brecht’s Threepenny Opera: “Some are in the dark and others are in the light we see them in the light in the dark we do not see them.” Recto, the letters of the text surged and subsided in light while verso, every one of its tangle of wires was on view. A sublime, complex object, meticulously fabricated, this work is a great introduction to Farsi’s conceptual practice.

Farsi writes that her work is “responding to contemporary culture’s decisive need to forget – a sort of amnesia in the face of too many sources and too much information and too many reported catastrophes.” Speaking to the ways that political events affect the role and agency of the individual, Farsi’s installation at Pitzer College entitled Crowd Control included a crowd control barrier made with fluorescent tubes and a large sculpture resembling a sign from which the text “YOU ARE INVISIBLE” was cut.

Her installations, which have included sculpture, video and inflatable objects, often incorporate text. Her project Losing Themselves in a Distance to Far Away Heights, at Disjecta, included a massive sculpture of letters reading “dream the living” alongside printed email responses Farsi had solicited from Iranians (Farsi is herself Iranian-American) each answering her question, “What does it mean to live the dream?”

Selected for The 9th Northwest Biennial at Tacoma Art Museum, Farsi has also had numerous solo exhibitions including those at Delaware Center for Contemporary Art, The Barron and Elin Gordon Galleries at Old Dominion University and Sculpture Center in Cleveland. This summer, her work will be included in Portland2016: A Biennial of Contemporary Art, produced by Disjecta and curated by Michelle Grabner.

Farsi has been awarded several residencies including the Bemis Center for Contemporary Art award and The MacDowell Colony and was named a Hallie Ford Fellow in 2014. Farsi is an associate professor of art at the University of Oregon. She received an MFA from Ohio University.