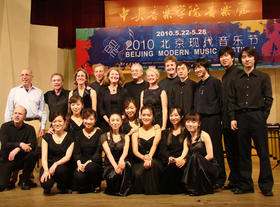 On another early spring evening almost a year ago, a small group of us gathered in the living room of a home high in the westernmost reaches of Northwest Portland to hear Third Angle New Music Ensemble, Portland's contemporary chamber music ensemble, delve into Terry Riley's minimalist masterpiece "In C." As the musicians chased one another through the piece, we were captivated by the hypnotic repetitions and subtle playfulness of the work in the hands of these fine musicians. This is not what most listeners expect when they hear the words "chamber ensemble," and that's the point.

This salon was a prelude to the Third Angle concertChance/Perchance for which Third Angle would play works by Riley and David Schiff and interpret a Ramon Sender piece in which the score is generated by a tank of tropical fish and "The Metaphysics of Notation," an epic graphic score (a visual cavalcade of every kind of glyph except musical notation), by Mark Applebaum. For chamber musicians, interpreting Sender's and Applebaum's works, just as improvising within Riley's "In C," was not unlike launching themselves off the high dive. And it's this kind of risk taking (and sense of fun) that has made Third Angle the compelling ensemble they are.

In the intervening year, Third Angle has taken "In C" halfway across the world. Their 2009 performance China Music Now at the Portland Art Museum with noted Beijing composer Ye Xiaogang led to an invitation to perform at the Beijing Modern Music Festival. In Beijing, "In C" became even more of an adventure for Third Angle as eight of their number played the piece with 10 Chinese musicians playing instruments including a hammer dulcimer or yangquin, a two-string violin called the urhu, and the zheng, a zither. The program was rounded out with works by Chen Yi and Oregon-based composers David Schiff and Tomas Svoboda, making it a true cultural exchange.

Even more remarkably, the dates of the festival coincided with those of an Oregon trade mission led by then Governor Kulongoski. The Oregon Arts Commission, the governor's office, the City of Portland, and individual supporters provided funding for Third Angle's Ron Blessinger and Susan Smith to travel with the trade delegation to Fuzhou (capital of Oregon sister state Fujian province) and Shanghai before Beijing. Blessinger and Smith played new works by Schiff and Robert Kyr then presented the musical scores signed by these Oregon composers to their hosts.

In Third Angle's rich, 25-year history, the China trip is undoubtedly a highlight. Founded, as artistic director Ron Blessinger says, by young musicians who wanted to play the music of contemporary Oregon composers, the Third Angle New Music Ensemble comprises members of the Oregon Symphony and a revolving cast of characters drawn from the Oregon Symphony, Portland Opera, Florestan Trio, and Chamber Music Northwest. Third Angle has played the music of adventurous composers like Reich, Riley, Jennifer Higdon, Ernest Bloch, and Zhou Long, commissioning more than 25 new works along the way. They've also performed tango, done film scores, performed with Oregon Ballet Theater, Body Vox, and the Jefferson Dancers, and have been in the pit at the Portland Opera. They've taken their music to nontraditional spaces and even to the streets of Portland. Audiences who might not enter a concert hall for a modern chamber music concert were delighted with Third Angle's City Dance which paired modern and contemporary music with work by three Portland choreographers honoring Portland's Lawrence Halprin-designed series of plazas.

On Friday, March 11, Third Angle Ensemble celebrates their 25th anniversary with Reichanalia, a concert of works by modern master Steve Reich at the Atrium at Montgomery Park (2701 Northwest Vaughn).