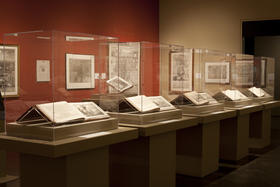 By Lisa Radon | Monday, January 3, 2011
Ancient Rome in Contemporary Eugene Giuseppe Vasi's Rome: Lasting Impressions from the Age of the Grand Tour goes from the U of O Jordan Schnitzer Museum of Art to Princeton

In 21st century, if we can't fly to Rome, we can at the very least, via the internet, instantly view photos of its famous buildings and watch narrated travel videos that allow us virtually to travel the ancient city's streets. Thanks to 300-year-old etchings and a University of Oregon exhibition and web project, we can virtually visit not just Rome, but the Rome of the 18th century.

Rome has been a key cultural tourist destination for centuries. Northern European aristocrats on the Grand Tour, a kind of cultural finishing school, were drawn to Rome not only as a seat of learning, but also for its classical ruins as well as its architecture and visual art. And for these well-to-do travelers, the 18th century equivalent of both postcard and travel brochure, a souvenir of the experience, was the veduta or city view, either a painting or more affordably, an etching or collection of etchings of sites in Rome that the traveler had visited.

The triumphant Giuseppe Vasi's Rome: Lasting Impressions from the Age of the Grand Tour, a Fall 2010 exhibition at the the Jordan Schnitzer Museum of Art at the University of Oregon lets us see the Rome of the 18th Century as the Northern Europeans on the Grand Tour would have seen it, through the vedute of Giuseppe Vasi (especially his comprehensive record of the city's architecture and monuments in his Delle Magnificenze di Roma antica a moderna, published from 1747-1761) and the plan views of his contemporary and collaborator, cartographer Giovanni Battista Nolli (1701-1756), who published the first accurate map of Rome, La Pianta Grande di Roma, in 1748.

More than frozen pictures of palazzos, churches, and obelisks, Vasi's finely detailed vedute crackle with the life of the streets: dogs bark at horses drawing carriages past small groups strolling, loiterers lounge on the steps of a church, street performers gather crowds.

Giuseppe Vasi's Rome, the first major exhibition of Vasi's work, was curated by James Tice, UO architecture professor and a research fellow at Studium Urbis, an international study center in Rome devoted to study of the city's urban history and James Harper, associate professor of art history at UO who worked previously at the Philadelphia Museum of Art, the National Gallery and the Fogg Art Museum.

Perhaps the most remarkable thing about the exhibition, and something that lives on after the exhibition moves on to the Princeton University Art Museum, is the interactive, digital aspect of the show. At the museum it was housed on iPads, but it can also can be found on the website, Vasi's Grand Tour (http://vasi.uoregon.edu). Tice and developer/designer Erik Steiner (who was assistant director of the InfoGraphics Lab in the UO Department of Geography at the time) created Vasi's Grand Tour with Allan Ceen, PhD, an urban consultant with Stadium Urbis, and a team of consultants, staff in the UO Department of Geography's InfoGraphics Lab, and students.

In a boon for scholars of architecture and the history of the urban landscape as well as those interested the vedutisti and the Grand Tour and 18th century Rome, the project pairs digital scans of hundreds of Vasi's vedute with the sections of Nolli's map that they depict, but that's not all. The viewer can read about the area, buildings and bridges pictured and can zoom in for a close view of the etching. One can even toggle back and forth between contemporary photos shot by Tice for each of Vasi's vedute that demonstrate how much has changed in several hundred years...and how much remains the same. There are essays on Vasi, on his the vedutismo tradition, and the Grand Tour. Vasi's vedute can be called up by theme—urbanism, architecture, city life, landscape—by location, by architect. Clicking on a building in one of the etchings pulls up its name and a cross-referenced list of other etchings in which it appears so that viewers can pull up multiple views of it and view it in context. Vasi's Grand Tour builds on work done in 2005 by Tice, Steiner, and Ceen on the Nolli Map Engine (http://nolli.uoregon.edu), an interactive, digitized version of Nolli's remarkable map. Together these tools shrink the 300 years and 5895 miles separating Eugene, Oregon and Vasi's Rome, building a considerable contribution to scholarship in this area while opening a number of gateways to further inquiry.