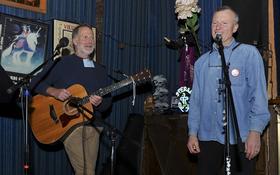 Jon Broderick and Jay Speakman perform at the Voodoo Lounge during the Fisherpoets Gathering.

Packed like salmon in a tin can, the audience at Astoria’s Pier 11 was already overflowing into the lobby on an unusually sunny Saturday afternoon in February. Everyone listened intently as local poet Nancy Cook launched into one of her newest songs about going clamming during low tide. It didn’t take much urging from Cook to get to crowd to join her on the refrain, “It’s a minus tide this mornin’; I’ll meet you there.”

The warm and enthusiastic ambiance reflected the 18th annual FisherPoets Gathering, which drew 87 participants from 12 states and three countries. All worked in the commercial fishing industry or were connected to the fishing community. From Feb. 27 to March 1, they recited poetry, sang ballads and reminisced on the fishing life at six venues in downtown Astoria. The Fisherpoets Gathering is supported by an Oregon Arts Commission Arts Builds Communities grant.

Back at Pier 11, energetic Tom Hilton, a gillnetter who grew up in Uniontown area of Astoria, started his set with a poem titled “The Uniontown Supreme Court,” referring to a group of codgers who had long ago retired from fishing. They drubbed many topics, including the “Deadliest Catch” TV series, which was described as “overrated, overstated, prima donnas.”

Elena Lansing from Salem worked as the deck hand on her father’s boat in Bristol Bay, Alaska. She sang “The Gillnettin’ Ground,” using her own lyrics, and followed it with spirited renditions of “Saint Brendan’s Isle” and “The Ways of Man.”
Jon Broderick of Cannon Beach and Jay Speakman of Gearhart did a set in the Voodoo Room that featured Broderick on guitar and Speakman on harmonica. Both men practice set netting, which means they spend a lot of time in chest waders in muddy, shallow waters. Their funniest song, “Set Net Naked Day,” advocated setting aside one day each year to fish in the buff:

“It’s not pretty; it’s a little risqué. It looks a little like a painting by Édouard Manet.
But the fish are naked and so are they on Set Net Naked Day.”

At the Wet Dog Cafe, Mary Jacobs of Ophir read from her prose poems about fishing in Kodiak, Alaska, and her frustration with sea lions. At the Astoria Event Center, Dave Densmore of Astoria lamented the good old fishing days with his poem “Progress?” His “Old Sea Stories” cautioned a cocky young fisherman from disrespecting an old timer, and “Across the Deck” described the time-honored tradition of working as a deckhand for a long while before moving up to the wheelhouse.

Judging by the number of buttons sold (well over 1500), this year’s FisherPoets Gathering was the most successful ever. Its growing popularity continues to surprise its founder Broderick and his colleague Speakman.

“We’ve avoided large venues, because they aren’t intimate and funky like the smaller ones,” remarked Speakman. “We added Pier 11 this year, but we might have to add another next year. It’s kind of crazy but in a wonderful way.”