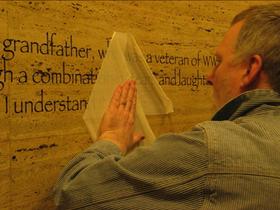 On any given day, thousands of students, college personnel, and visitors walk through Smith Memorial Student Union, the all-purpose social hub of Portland State University. A few of those who pass through Smith Hall might pause and notice one of the thoughtful messages now adorning a myriad of surfaces of the building. Take, for example, a sentence in the main lobby that reads "Nothing is worth more than this day. Father to Daughter." The sentiment of this statement is obvious, but its wry placement on the wall next to an ATM machine brings another layer of meaning.

The gathering, selection, and placement of these phrases throughout Smith Hall are the work of dance and movement artist Linda K. Johnson and painter Stephen Hayes. The project is the result of an invitation to artists for temporary art projects, commissioned by Portland State University through Oregon's Percent for Art Program, and it joins nine other public art projects being installed in the building through the summer of 2009. Since their collaborative installation will only last a year, it is aptly named The Henna Project. The Henna Project has a homegrown feel about it, because Johnson and Hayes spent three weeks in Smith Hall, talking to people about personal words that they find especially significant.

"This project is about a person's internal life," explained Johnson. "We've collected thoughts that have guided people who live and work here."

Each saying is accompanied by the source of the wisdom -- Father to Daughter, for example, Friend to Friend, or Mother to Son. Sometimes, Johnson and Hayes talked to individuals one-on-one and at other times they spoke to a group or an entire classroom.

"We found people to be very open to thinking about what words really mean," said Hayes. "They were glad to share their stories with us. Sometimes they wrote them out right on the spot. Others sent in their words via email."

"One day we spoke with several twenty-year-olds from Saudi Arabia," added Linda. "Stephen speaks a little Arabic because he lived in the Middle East; so we ended up having a twenty-minute conversation with them. Some of their words are on the walls. We had them translated as well. For anyone whose native language wasn't English, we asked them to write it out for us, so that we could use it, and give us a translation."

As a result, the Henna Project uses five languages: Russian, Spanish, German, Arabic, Nepalese, English, and Farsi. From the numerous thoughts that they collected, Johnson and Hayes selected forty of the best and sprinkled them throughout Smith Hall, using vinyl that applies right to the wall, glass, or other surface.

The effect is subtle and stunning at the same time. A statement may appear just above a water fountain, on a window, or on a door. "I have not learned anything that was not useful" is a thought that may have resonated with many students while they sit in the commons area. They just have to look up from their textbooks to discover it.