Josh Smith and the Craft of Art 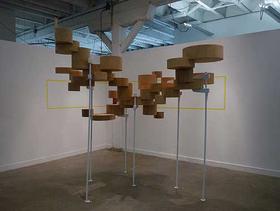 Josh Smith, "The Righteous Foundation of Us."

Like a cutaway section of a fusilage, Portland artist Josh Smith's big curved plywood sculpture in his 2010 installation at the Manuel Izquierdo Gallery “Working With Doubt” (2010) brought to mind the utopian hopes of modernity via the sleekness of the manufactured. On the reverse of the freestanding piece, its grid of ribs was revealed, interrupted by an angular dash of intersecting white plains that grew out of its side like cut crystal. The perfect and perfectly complicated joints of these angled white planes gave one pause in a way to which one is accustomed when confronting works of art in 2011.

I am thinking of learning embroidery as a child and the ideal that the stitching on the back of the fabric should look as beautiful as the stitching on the front. I marveled and still do that intention and care on the part of my mother and grandmother could make that happen.

After decades of artists pushing back against craft with an anti-technique aesthetic or outsourcing the fabrication of their works, there's a degree to which technique has become less important to the artist or the work, and it's definitely not the first thing we usually consider when we talk about an art object. So when a work is capable of wowing us as a finely crafted object in addition to being a smartly conceived and even moving work, we sit up and take notice.

Josh Smith is an artist whose work has a deep grounding in fine craft. His works are formally beautiful as well as conceptually evocative. Often made of a blonde wood, the form is the thing (not the finish as in so much traditional woodworking). His pieces tend to have sweeping form with touches of minute detail, elements that convey strength and structure and others that appear delicate, as a web of small segments of wood that trace the topography of an otherwise invisible mountain in “holy mountain” (2011).

Smith has written of his work, “My work often relies on the language of the architectural model or the illustrated proposal, which represents the latent potential of the Idea in flux.” As such it's appropriate that he sees this work as addressing modernist philosophies and architecture as what was once believedto be ineluctable forward motion in all things, is now seen as cyclical, circular, delta-like, tangled. Certainly we've come to realize in economics, politics, architecture, art, you name it, that making it new (nod to Ezra Pound) does not equate making it better. There's a melancholy in works likeSmith's “The Righteous Foundation of Us” that looked like a model for an urban housing project where every dwelling was a section of a cylinder. It's a nostalgia for the hopefulness of a time when progress and technology seemed like they would indeed make it all better.

It's wonderful to see the visible threads that weave through Smith's work, both in materials and visual vocabulary such as the grid of ribs supporting a curved ply face or the facets of the wood planes repeating themselves a year later in a carved and faceted hunk of sandstone. Always there are little asides in a piece—a small box on the floor or interrupting a plane—asides that to me stand in for the craftsman before the mighty work of making such a thing as well as offer scale for the significance of the individual man in context of the scope of all that is modern.

Smith received his BFA from Oregon College of Art and Craft and has shown regularly in Portland and elsewhere in solo and group exhibitions at venues including the Manuel Izquierdo Gallery at Pacific Northwest College of Art, at Igloo Gallery, galleryHOMELAND, WorkSound, and the Museum of Contemporary Craft. Smith is currently preparing for two major exhibitions for which he's received support from the Oregon Arts Commission: a solo exhibition at Linfield College, one of the region's premier spaces for installation art (on par with Disjecta) and a two‐person exhibition at Gallery Maksara in Mumbai, India.

In addition to teaching and mentoring MFA candidates at PNCA, Smith has been Scultpure Artist in Residence at PNCA and co-curator at TILT Export, an independent curatorial project which grew out of the late TILT Gallery and Project Space.