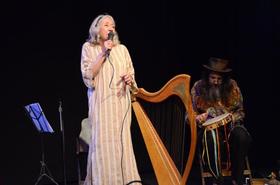 “You want to put the poetry in clothing that fits,” says poet and publisher margareta waterman. This is why almost every one of the 70-some books and chapbooks of poetry she's published through her press has had a distinctive feel, taken a different form, had a different typeface or been illustrated in a different manner.

It takes the sensitivity of a poet—waterman has herself written more than two dozen books of poems, short stories, and a novel—to make the publisher aware that every poem doesn't want to be printed in black type alone on a white page, that it might want unusual paper stock or hand-drawn illustrations woven in and out of the stanzas.

The books and chapbooks by a range of regionally active poets, as well as improvisational musicians and others that waterman‘s nine muses book has published, serve as a significant document of non-academic poetry coming out of the Seattle-Portland nexus from the late 80's to the present.

Almost 80 now, waterman came to publishing her own poetry and that of others at mid-life. Born in New York in 1932, she became a wife and mother, but chafed against the perceived boundaries of the typical domestic life. Her introduction to poetry began in the usual manner. “In college I read T.S. Eliot, Pound, and Wallace Stephens, thank goodness,” waterman says. “He moved me. And of course, Dylan Thomas.”

She was acquainted with New York poets Audre Lord and Diane di Prima, but when opportunities opened to her as they did to her acquaintances, she reports that she “ran the other way.” She relates a story of seeing Gary Snyder giving a reading in a suit and tie and feeling that he looked as though he was in a straight jacket. There'd be none of that for waterman.

At the same time, waterman, who is an accomplished Tarot card reader, became interested in esoteric thought and expansion of consciousness, in, she says, “becoming who I was.”. This becoming included shaking off the strictures of a traditional marriage and moving to a Southern Oregon commune with her family where she lived for seven years. “You have to have your freedom,” she says.

And she was writing. At first it was just to clear her thoughts of the day before she went to bed at night. “I put them in a notebook,” she says. “Some of these thoughts started dropping into poems. I realized what was happening to me was poetry.” But as Emily Dickinson did, waterman would write the poems and put them in a drawer.

She traveled throughout the West. “I was looking for something,” waterman says. “And I found Seattle.” What she found was an active community of poets, a community centered around the Red Sky Poetry Theater, various open mic's as well as early Bumbershoot festivals.

In Seattle, waterman flourished. She found herself performing her poems with improvising musicians like Wally Shoup. “He was my biggest teacher of how to perform.” And she founded nine muses books in 1987. “The xeroxes were piling up,” she recalls, of her own work as well as that by others. And so she began to publish chapbooks.

Today, waterman lives with members of her family on a property outside a small town southeast of Roseburg, Oregon. But she frequently travels to both Portland and Seattle for readings, most recently reading at St. John's Booksellers with musical accompaniment, her new series of love poems about an affair between Helen and Achilles.

Like the name of her publishing concern, waterman's poems frequently have a classical underpinning. Orpheus, Clytemnestra, Astarte, Osiris, Helen are invoked, addressed, or embodied. And her invocations don't begin and end in classical mythology, Kali and Ereshigal, the Sumerian goddess of the underworld also make their way into her poems.

But her poems are not backward looking, these are contemporary concerns of everyday life, albeit an extraordinary one, framed with classical reference. Her poems are earthy and notably unflinching and explicit about sexuality. Threaded throughout her hundreds of poems is a romantic streak a scarlet-mile wide. It makes sense, as her way of being in the world is equal parts independent unconventionality and connectedness, both with her community—and Nine Muses is a big part of this connectivity—and with individuals.

In her book Iteration, waterman writes,

i am not a poet because i write poetry

i am a poet because

is grist for the mill

that grinds me into illumination

so that only words are left