A Picture of Us: Oregon's Capitol Art Collection 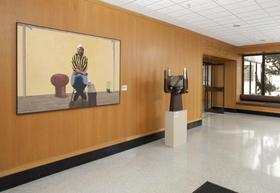 By Lisa Radon | Thursday, March 3, 2011
A Picture of Us: Oregon's Capitol Art Collection

Who do we think we are? The art we make is a reflection of what we think, what we see, what we imagine. Collectively, it is a mirror of who we are. Art made in Oregon, as collected in Oregon Capitol Art Collection is a fascinating glimpse into that mirror with views of the Oregon landscape and portraits of Oregonians leavened with abstract works, sculpture, and craft objects. It probably says just as much about the era of the selection (most works were contemporary) and the selection jury and screening committee that acquired the 150-plus works for the Capitol between 1976 and 1978. They gave themselves a simple directive: select, “artworks that were and would remain significant to Oregon's history.”

In 1975, the Oregon State Capitol was doubled in square footage to make space for offices for legislators for the first time. In anticipation of the project, the Legislature created the Art in Public Places program setting aside “not less than one percent” of the construction dollars for commissioning and acquiring works of art. Thus the collection was in fact Oregon's first Percent for Art project.

Why are we talking about the Capitol Collection now? Because as a part of the 2008 Capitol Wings major renovation, the art collection was put in storage and a new selection committee was formed to figure out what to do with the $180,000 of Percent for Art funds that would become available. This new committee determined to focus on the care, assessment, conservation, and reinstallation of the works as well as the acquisition of 14 new works including those by LeRoy Setziol, Terry Toedtemeier, and James Lavadour. A new catalog commemorating the reinstallation of the collection following the Capitol renovation gives some background on the selection process as well as a checklist of the works included. And for the first time, the photography collection is integrated in the installation, designed by Lawrence Fong, curator of American and regional art at the Jordan Schnitzer Museum of Art.

It's a family portrait in many ways of Oregon's visual arts community. A self-reflective collection, it includes, for example, a casual portrait of Rachel Griffin by photographer Marian Kolisch. Griffin, longtime curator of the Portland Art Museum, was on the initial acquisition screening committee for the collection. And it includes both a sculpture by and a George Johanson portrait of artist and educator Manuel Izquierdo. Many of the collected artists are also longtime and influential educators, as was Izquierdo. There are terrific pieces by Bill Hoppe who teaches in Bend, and Lennie Pitkin who has for years taught at PNCA. Much of the Museum Art School (which later became PNCA) faculty is represented including Jack McLarty, Louis Bunce, and Lucinda Parker. There are notable absences, it should be said. That Mike Russo, Lee Kelly, and Carl Morris are not included is surprising.

Other notable facts about the collection? There are more prints that you'd expect. The photography is particularly strong, with the more recent acquisition of Terry Toedtemeier's “Fog at Entrance to Sea Cave, Cape Mears, OR” a highlight. And interestingly, it's the craft that stands out from the original collection. There's a great example of a Ken Shores fetish object, “Fetish #13-4;” Marie Lyman's sublime “Desert Grasses,” a geometric textile work in bands of earthy tones; the terrific Betty Feves “Garden Wall,” three blocky ceramic forms dripping with glaze on which are stacked rounded “heads”; and Judith Poxson Fawkes' weaving “Untitled,” one of two works specifically commissioned for the building (the other being Tom Morandi's dynamic sculpture “November Sprinter” over the entrance of the building).

The Capitol Art Collection can be viewed by the public any day that the Capitol building is open. Don't miss the fantastic “Five Parts in Search of a Circle” by Hilda Morris. It's in the House lobby on the second floor.