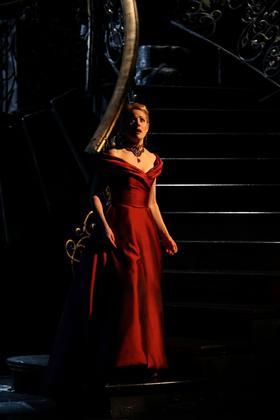 All the world's a stage for actor Robin Goodrin Nordli who is enjoying her 16th year at the Oregon Shakespeare Festival. Known for her captivating performances that range from the uptight and neurotic Hedda Gabler in Ibsen's Hedda Gabler to the sweet and patient Roxane in Rostand's Cyrano de Bergerac, Nordli has performed 46 roles in 36 productions at OSF.

This season Nordli holds court as Lady Macbeth in the company's production of Shakespeare's Macbeth and plays multiple roles in Cervantes' Don Quixote. But after the season ends, with Fellowship funds from the Arts Commission, Nordli will take her acting skills and knowledge to Beijing where she will share them with Chinese undergraduates who are learning the ropes on Shakespeare.

"This all started a couple of years ago when some professors from Taiwan asked me to come to their country to talk to their students about Shakespeare," recalled Nordli. "So I did that and had a fabulous time. Now I've been asked by Joe Graves, an actor who is working to establish more theater in China, to come to Beijing to coach 12 groups of university students in some scenes from Shakespeare's plays. After coaching them, they will have a competition and the winner will spend three months taking classes at the Royal Shakespeare Company in England."

Nordli will use her Artist Fellowship to support her trip to China. Because Chinese universities don't have theater departments, Nordli hopes that she can make a difference. Nordli, herself, did not go to college with a theater major in mind. She grew up in a suburb of Chicago where she played flute and received a Bachelors in Music Education from the University of Tulsa.

"Tulsa was as far away from home as I was allowed to go. My father drew a circle on the map -- 750 miles -- one day's drive by his standards. And there was Tulsa."

After working in San Diego as a band teacher in an elementary school, Nordli realized that she wasn't in the right occupation.

"I wasn't very good at teaching," recalled Nordli. "One day I was screaming at a kid "get the cello out of your mouth! That's when I knew that I had to change things."

Because she was already thoroughly engaged in community theater, Nordli decided to move to San Francisco to pursue a masters degree in acting from the American Conservatory Theater. After graduating she worked in many theaters and spent five years in Los Angeles doing voice over work, movies, and TV. Yet her real love had always been for live theater, and she auditioned nine times before being accepted by the Oregon Shakespeare Festival.

"I love the diversity of roles that comes with being part of a repertory theater," remarked Nordli. "It's given me a lot of depth as an actor. Still, it will be a challenge to take what I know to China and share it, but this is an opportunity that I can't pass up."