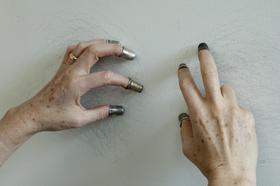 It is not reductive to say that Linda Hutchins' works are tracings of the movements of body and mind through line, word, and form.

In the past decade, she has made works that are notably ethereal, executed, for example, in the most fragile gampi paper, in transparent organza, drawn on a wall in thin lines of silver worn from a spoon handle. Her work also frequently reverberates with the residue of repetitive actions.

And why not? What is daily life but a series of repetitions? (I sleep, I wake, I get up, I walk, I rest.)

Hutchins has made beautiful typewriter drawings of repeating words or phrases that up close are familiar and specific, “caution,” or “hurry up,” but from a distance fade into textured rectilinear forms. She has three-dimensionally traced the outlines of everyday objects ranging from plants to hammers in fragile organza soft sculptures.

In recent installations, Hutchins has traced natural movements of the body, a walk, the gesture of an arm, the stroke of a pen across paper repeated so that the tiny variations, wobbles are inscribed in the drawing. One almost imagines that if we were to look closely enough we might see the regular beating of her heart or intake of her breath in the seismographic lines of her drawings.

There was a time Hutchins was an engineer, and there is something in the precision in thinking that that profession requires that bleeds into her current art practice. She has said, “I use process to impose structure; then, within the limits of that structure, my moment-to-moment focus directs the outcome.”

The very human and humane sensibility of these gentle works counterbalances what often begins as the linear nature, for example, of the drawings or the systems approach in the taxonomic language of the organza forms. It is because these drawings, these forms rely on execution by the hand that their linear nature is subverted; it is because otherwise masculine forms of hammer and rope are executed by hand in a feminine and ethereal material that their symbolic language becomes rich and complicated.

Last year, Hutchins collaborated with poet Endi Hartigan to co-create an installation and performance, silver and rust, at Nine Gallery in Portland. Hartigan wrote and revised a long poem, and Hutchins executed repetitive, gestural wall drawings with ten silver-thimbled fingers. The poem lived in the space, a few lines inscribed high on the walls, a couple of pages tacked to one wall. The poem did not determine the drawing; the drawing did not dictate the poem.

Both were far too abstract for any easy one-to-one correspondence. Rather, there were points at which the two touched. As Hutchins’ thimble-clad fingers touched the walls, inscribing image, that connective silver membrane between word and image filtered the empirical, the obvious, through the sensitivities of two artists, creating an ambiguous zone open to the viewer’s experience and imagination. Poem and image have now become a book, out of the flowering ribs.

Hutchins has received two fellowships from the Oregon Arts Commission, grants from the Regional Arts & Culture Council, and residencies at Caldera.

She was just awarded major support $1,500 from the Oregon Arts Commission and $5,000 from The Ford Family Foundation to support the development, presentation of and catalog documenting a new suite of silverpoint drawings at Salon Concerts' chamber music performances in Austin, Texas, in January, 2013. Hutchins will draw in concert with a pianist and a flutist in new work composed for her striking and stroking the drawing surface , making sounds as well as marks.

Hutchins is represented by Pulliam Gallery in Portland, Oregon. Currently, Hutchins has one piece drawn with silver thimbles on her ten fingertips on display: 15-minute Phrase Rhythm (William Blake), executed with artist Pat Boas, is part of the PSU alumni exhibition at PSU's MK Gallery through November 23, 2012.