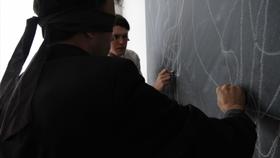 “Children's Games,” as a title, sounds innocent enough. But look at the Pieter Bruegel painting of the title and see that not all of the 91 games depicted are innocent or fun.

Artist, composer, director Seth Nehil has named his upcoming multimedia performance work after the Bruegel painting, and as with Bruegel's clear-eyed view of the real games children play, expect from Nehil something more complex and a little darker than the title suggests.

For Nehil's Children's Games, debuting in October at The Mouth in Portland, he brings cinematic image, live vocalists, and an electronic band to bear on ideas around the loss of play (as well as the associative and irrational aspects of play), psychoanalytic film theory, and horror films, especially those about children like The Changeling orThe Bad Seed.

Nehil been thinking for some time about the loss of play in children's lives. And in his reading about play, of course Bruegel's painting came up. The painting suggested the idea of the world upside down: that Children's Games represent adult folly.

Nehil notes, “I have long been interested in the idea of festival or saturnalia, a moment when society allows inversion, allows folly to come to the surface,” as it does during the space of games. The space of cinema could be seen as a similar space, outside of the normal rules of society. “The link for me is the idea that one of the things that has been replacing undirected play is media, and I use cinema as paradigmatic representation of media or the screen.”

As well, there are a number of horror films that cast the child as a figure to be feared, particularly as Nehil notes, a child who hasn't been properly “trained” or inculcated with ethics or societal mores. Nehil digs as well into psychoanalytic film theory (which in the 70s cast film itself as a threat. Nehil says, “They talk about the 'cinematic apparatus,' seeing it as an evil machine that traps people.”) and the direct physical or emotional effects sound can have on the body. Nehil says:

It was a confirmation of something I'd been thinking about, that films address themselves directly to the body, bypassing the intellectual filter. Horror films do this trying to scare. The response is bodily, goosebumps, hair standing on end, screaming.

And coming from music, from thinking a lot about music, I was interested in music of horror movies in sense of music being able to provoke physical response. Music is the most Dionysian art form; it addresses itself directly to the emotions or to bodily response.

He is as interested in addressing and incorporating as he is in parodying theory, and that's where the fun lies. Which is to say you can't expect a cut and dried argument from Nehil; he's much more interested in throwing a bunch of ideas up in the air, drawing illuminated lines between them and allowing the constellation that results be the work.

And this is where the work gets interesting, as the push and pull between ideas and elements is perhaps unresolved or resolves differently for each viewer. Nehil points out that the Bruegel painting itself has been subject to myriad interpretations over the years.

In addition to the performance, music, and visual work Nehil is a composer, intermedia performance maker, director, visual artist, writer, educator. He's released 14 albums and written music for the Flash Choir as well as showing his visual work in solo and group exhibitions in Portland and Brooklyn.

For the past five years, he has been researching the interaction of sound and image in both theory and practice while teaching courses on sound and video at PNCA and WSU. Prior to that, he co-edited FO A RM, a journal of art and research, for five years. He's a regular contributor toIntransitive online music magazine and has written for Drain andShifter among others.

Nehil's trajectory from experimental composer and musician to intermedia artist and director began through collaborations with a number of choreographers and dancers including Linda K. Johnson and Linda Austin in Portland and Liz Gerring Dance in NY. All the while researching the interaction of sound and image in both theory in practice, in 2008 he created Flock and Tumble with four video screens, 6 channel recorded sound and 12 live performers and in 2009, he co-created with Linda Austin Bandage A Knife, developing cinematic movement and sounds loosely based on a 1967 Japanese gangster film.

For Children's Games, Nehil is collaborating with Jonathan Walters of Hand2Mouth as dramaturge and advisor and videographer Dicky Dahl. Development of the work is supported by grants from the Regional Arts and Culture Council and the Oregon Arts Commission.